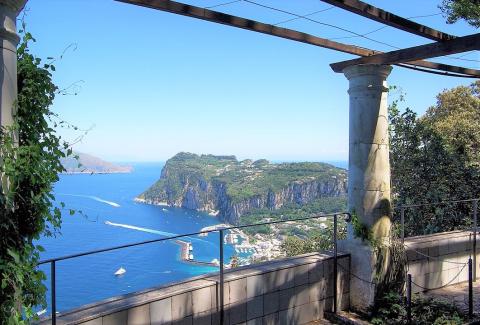 The emperor Tiberius left Rome in AD 26, never to return. He spent the rest of his life on the island of Capri on the Amalfi coast, where he built several villas.

Capri’s rocky cliffs rise directly from the sea. Its world-famous views include the natural wonder of the Blue Grotto whose azure colours and light defies reality.

The villa of San Michele stands on a high rocky outcrop 325 metres above the sea, with views over the Bay of Naples and the Sorrentine peninsula. It is one of Capri's main tourist attractions, on a par with the Blue Grotto.

To reach Capri, take a ferry from Naples or Sorrento, and in the summer, from Positano, Amalfi, Salerno, or Ischia. From the ferry port, you can catch a bus right across the island up to the village of Anacapri sitting high above the Mediterranean. From Anacapri it’s a short walk to the Villa.

Alternatively, for the energetic, you can climb the 921 Phoenician Steps, the long and steep stone stairway that unites the population centre of Capri town with Anacapri village.  The stairway was probably built by ancient Greek colonists, rather than by Phoenicians, and takes about an hour of hard climbing.

Swedish physician and writer Axel Munthe (1857 -1949) bought the ruins of a 15th century church on land above Anacapri. He spent much of his life building and furnishing the villa San Michele, and laying out the surrounding gardens on the site.

When Munthe began excavating, he found ancient marble columns and mosaics lying buried beneath the soil. He discovered the church in turn had been built on top of the ruins of one of Emperor Tiberius’ villas. Munthe added Tiberius’ marble column fragments and statues he found on the site, to the collection of Roman, Etruscan, and Egyptian artefacts he accumulated during his years of travel.

Munthe had no prior experience as an architect, but the Villa has been described by experts over the years as a work of architectural genius. The house was built to his own design, with, in his own words: “columns of priceless marble, supporting loggias and arcades, beautiful fragments from past ages strewn all over my garden, the chapel turned into a silent library with cloister stalls round the walls, and sweet-sounding bells ringing Ave Maria over each happy day.”

Visitors can admire Munthe’s collection of antiquities. There is a statue of the head of Medusa and a marble bust of the Emperor Tiberius. You will find sacred Medieval art, Tuscan furnishings from the 1700s, Roman frescoes and statues, and a marble mosaic table. An Egyptian sphinx sits on one of the most panoramic spots on Villa San Michele.

The surrounding gardens are lush with Mediterranean flora, including camelias, hydrangeas, rose bushes, and pine and cypress trees encircled by a white, trellis-covered colonnade. From the garden, the view over the Gulf of Naples is unforgettable.

Munthe’s well-known book The Story of San Michele has been translated into 50 languages. It has sold millions of copies all over the world and continues to be republished regularly. San Michele was Munthe’s home for more than 50 years. The villa has been left as he created it, with his furniture and his eccentric collection of curios and antiquities, acquired over a lifetime.

It is now run as a museum and a privileged retreat for scholarship-winning artists, researchers, students and journalists who can spend time there dedicated to study.