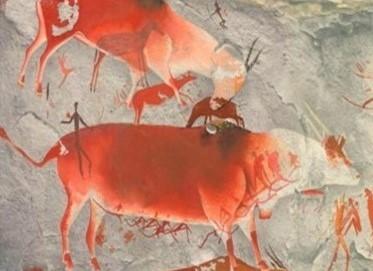 Harald Pager was an Austrian who came to South Africa after the Second World War. He was a designer, artist and photographer of wide experience. During the 1960's he became interested in Bushman paintings. The beauty of the rock art captivated him, and in 1967 he and his wife Shirley Ann resolved to use their skills as artists and designers to record the paintings in the Ndedema Gorge.

In October 1967 they sold their furniture and their sail-plane and set out for the Drakensberg rock shelters that were to be their home for the next two years. Pager and his wife lived in the caves of the Ndedema Gorge during the project.

Many San paintings are faint and unsuitable for photography. The images are often very small, measuring only one or two centimetres. When large panels of over a hundred paintings are reduced to a single photograph, these small but important paintings are almost invisible.

To record the paintings, Pager developed a unique technique. He photographed the paintings in black and white film, then took the film to Pietermaritzburg, where he made life-size black and white prints at a local firm of architects. He returned to Ndedema Gorge with these prints where he duplicated the images with oil paints, working on an easel in front of the paintings.

Harald Pager’s copies were published in 1971 in his outsize book titled Ndedema: A Documentation of the Rock Paintings of the Ndedema Gorge. The paintings are presented in stunning colour but that’s not all.  In various chapters on topography and geology, climate, botany, zoology, history and archaeology, he presents the reader with a wealth of analysis which gives insight into the lives of these stone-age artists.

Since Pager did his work as many as half of the paintings in the Ndedema gorge have been lost due to high rainfall in the region. Pager's photographs were stored for decades in long tubes and had virtually disintegrated over time. They were recently restored in a two-year project by a South African museum worker in Pretoria. The collection is now housed at the Rock Art Research Institute at Wits University.

There are many other books about San rock art but Ndedema is the most detailed study available. The collection is an irreplaceable treasure, part of our national heritage and of international importance. The book is out of print and features at rare book auctions.

After the Ndedema project, Harald Pager moved to Namibia where he recorded the rock art of the Brandberg and published several books. He died in Windhoek in 1985.

We know about San belief systems through the work of the German linguist Wilhelm Bleek (1827 – 1875). Bleek met with Bushmen prisoners on Robben Island. In 1870 he took a San prisoner into his home in Mowbray. He recorded the language of the San prisoners and stories about their lives, history, folklore, beliefs and customs.  After his death his daughter Dorothea Bleek continued the research on the San language, customs, their rock art and its symbolism.

The Bleeks learned that the artists in each group were shamans or medicine men.  The San believe that an invisible energy exists in almost all animals and in great quantities in the eland. San shamans must tap this energy before journeying to the spirit world, where they must perform tasks on behalf of the tribe such as rainmaking, fighting off evil spirits, casting spells on enemies, and curing the sick. This potent energy is to be found, particularly, in the eland’s blood, fat, and sweat. When shamans painted an eland, they didn’t just pay homage to a sacred animal; they also harnessed its essence.

Although many of the messages in the paintings are shrouded in mystery, common themes include the San’s close relationship with nature, the eland, day to day life, the spiritual world, and the passing of history.  Contact with the farmers is depicted in the San rock art. The artists’ more recent paintings include cattle and sheep as well as people with guns, horses, shields and spears.

When Europeans first encountered rock art of the San people in southern Africa, they considered it primitive, simple pictures of hunting and fighting and daily life. But many authorities now think that much of the art portrays the experience of San shamans in their journeys to the spirit world. The Shamans needed supernatural vigour for their spiritual journeys and by touching the paintings, they drew on their spiritual power.

Much of the rock art in the Ndedema valley is shamanistic, with hallucinatory motifs and dream images such as the “Moon Goddess” and the mysterious “Sorcerer” of Sorcerer’s Rock.

Today there are guided tours to the Ndedema Gorge from the Cathedral Peak Hotel. The climb to Eland cave requires some endurance, but the striking rock art is well worth it. The view from the cave is sublime and you can sit for ages looking out over the valley with its ever-changing weather patterns. It is an unforgettable experience.