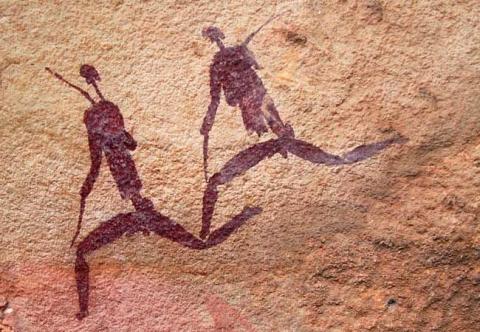 From the country town of Winterton in Natal, follow the road towards the Cathedral Peak Hotel until you reach the Brotherton trading store by the bridge over the Mhlwazine River. Secure your vehicle, shoulder your backpack, and follow the river upstream for two hours until you reach the foot of the Ndedema Gorge. Then climb hard for two more hours up to Elands Cave. Your reward? On walls of this cave you will discover 1 639 stunning irreplaceable unique rock paintings, the greatest concentration of beautiful and mysterious San rock art (Bushman paintings) on earth.

Known by the Zulus as Barrier of Spears and as Dragon Mountain by the Dutch settlers, the mountains and valleys of the Drakensberg are one of South Africa's most dramatic and beautiful landscapes. These mountains were home to the San people until the nineteenth century.

The grassy foothills of the Drakensberg attracted herds of antelope, and the San hunters lived well. For hundreds of years, they were secure, without the threat of invasion by hostile peoples. The San had leisure and security, and their delight in art is evident in the humour and beauty of their work.

The Ndedema gorge with its many caves and overhangs was a perfect home for the San. It is deep and well protected from harsh weather, and has fresh water in a clean river with a succession of pools. Tall forest trees provide shade all the way down the gorge.

The San have lived as hunter-gatherers in Southern Africa for at least 30,000 years and are thought to be the world's most ancient race. The arrival of cattle farmers in the Drakensberg destroyed their tranquil existence. The new arrivals hunted the wild game in the area thus competing for the San's food resources. The San in turn had no compunction in rustling the farmers’ precious cattle. Smallpox, conflict, enslavement and destruction of the San communities followed.

The San were at a huge disadvantage in numbers and had no guns or horses. The little people were hunted down and destroyed. Many fought to the death and preferred death to capture where they would be imprisoned or forced into slavery. Others became farm labourers and joined farming communities and intermarried.

Today there are no San people in the Drakensberg but their legacy remains in their art.

Some 22,000 years ago, the San were the largest group of humans on earth. Only about 100,000 Khoisan remain today, living in the desert areas of Botswana, Namibia, and Angola.

South Africa has the richest collection of San rock art in the world. The area most famous for these great cultural treasures is the Drakensberg and the greatest concentration is in the Ndedema gorge. The paintings are monochrome, bi chrome and poly chrome with perspective and foreshortening.

The colours in the paintings came from eland blood and gall, ochres for red and black, egg yolk for yellow and kaolin clay for white. The paints were bound together by egg white, aloe juice and the blood and fat of wild animals. Paints were stored in the tips of animal horns.

The San way of life is recorded on the walls of the caves and overhangs of the Drakensberg in which the San people lived. The significance of these 30 000 individual images at nearly 700 sites led to the Drakensberg being declared a World Heritage Site in 2000.

Subjects range from animals (mainly eland) to humans, to ox-wagons and mounted men with rifles. There are many Therianthropes, representations of people with animal features in trances. Human figures are depicted in scenes from daily life, battles and hunting.

Deep in the Ndedema valley is a painting of a wildebeest, an animal that lives on grass plains far from the mountains, suggesting that the San hunted far and wide over the area. There are two paintings of lions, and Leopard cave, as the name implies, has a single painting of a leopard in hot pursuit of a man. There are 12 depictions of bee swarms and some paintings of men on ladders, proving that the San people loved honey.

Although many of the messages in the paintings are shrouded in mystery, common themes include the San’s close relationship with nature, the eland, day to day life, the spiritual world, and the passing of history.

Contact with the farmers is depicted in the San rock art. The artists’ more recent paintings include cattle and sheep as well as people with guns, horses, shields and spears.