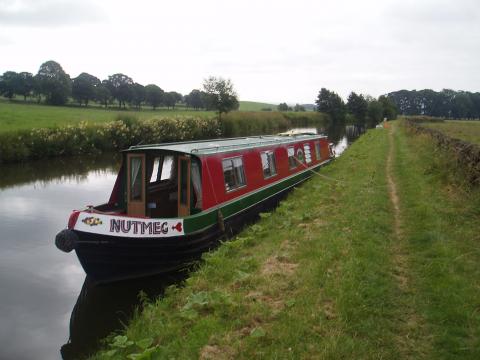 The Leeds & Liverpool Canal is the longest canal in Britain and passes through several villages on the edge of the Yorkshire Dales before ending in Leeds. Walkers and cyclists love the canal towpaths, and thousands of visitors come every year to see the two main attractions - the Bingley Five & Three staircase locks, and the Foulridge tunnel. In the old days the canalboats were pulled along the towpath by horses but today thankfully they are fitted with diesel engines.

There are places all along the canal to buy groceries and you can moor up and enjoy meals at canal side pubs. There are also free canal-side shower and toilet facilities, and you will find launderettes marked in the guide book

The section of the canal we chose cuts through the hills and valleys of the Yorkshire Dales National Park. The countryside is known for its stone walls and is mainly used for farming. Cows and sheep gather at the canal edge to drink.

The dales host many species of animals, birds, and wild flowers. For those who fish there is pike, roach, bream, perch and giant crayfish to be caught, well worth hiring a rod. The very fortunate may even glimpse a badger family outside their set on a summer evening.

The Leeds & Liverpool Canal runs through the centre of Skipton, gateway to the Yorkshire Dales. With a 900-year-old castle and cobbled streets Skipton is an interesting town with a rich history in the wool trade. You can visit the farmers market four days a week and enjoy the cafes and pubs along the canal waterside.

“Take the tiller!” I shouted to my wife from the top of the lock. “What’s a tiller?” she shouted back. We went on our narrowboat holiday without really knowing what to expect.  We chose the right canal and a good boat company, and we had a great time.

We were collected from the train station by a young woman in overalls who told us she looked after the engines on the boats. We later found she is a qualified mechanical engineer who previously worked at Richard Branson’s Virgin Airlines, but decided to join the family business.

After a warm welcome the Snaygill team gave us a thorough briefing on all the safety and practical information we needed to know to keep ourselves and the boat safe. We soon got used to handling the boat and made our way up to the first lock, where we received our tuition on how to correctly and safely use the lock system.

Locks on most canals don’t operate automatically and there are no lock keepers, so at least one person needs a reasonable level of physical strength and fitness on the lock itself, and you want a cool-headed person at the tiller.

Our boat company gave us a full briefing on lock operations and safety procedures, and were on hand to guide us step by step through our first canal lock.

These are resourceful people. Just 5 miles outside Skipton is the village of Rylstone, where the members of Rylstone Women’s Institute inspired the 2003 film “Calendar Girls”.  They created a calendar to raise money to fight leukaemia after member Angela Baker's husband died from lymphoma in 1998. The calendar portrayed the Institute’s middle-aged members naked, their modesty concealed by domestic items - pots, pans and vases of flowers.

The calendar caused a sensation. Launched in 1999, it sold 88,000 copies in the United Kingdom, double the sales of the Pirelli calendar that year. A second edition sold 200,000 copies worldwide, and a further 40,000 in the UK alone. The proceeds from the calendar went to the Leukaemia Research Fund raising £500,000.

Our holiday narrowboat Nutmeg was spotlessly clean and came with everything we were promised including a super-efficient oven. The saloon area has comfortable seating with a cooker, fridge-freezer, freestanding table, colour T.V. and DVD Player. Snaygill Boats suggested we take along a few DVDs as TV reception is poor on the canal.

There is a comfortable double bed in the main cabin and the rear cabin has two singles which can convert to a fixed double. The saloon and bedrooms are fully carpeted. The bathroom has a toilet and shower.

From Skipton we cruised west passing the villages of Gargrave, Bank Newton, East Marton and Barnoldswick, and reached the Foulridge tunnel on the third day. Turning round just after the tunnel we headed back to Skipton and continued east through Kildwick and on to Keighley, turning below the Bingley 5 Rise locks to return to our departure point. Each village has its own charm with its church, war memorials, grocery stores, and the usual curry house serving chicken tikka marsala, a dish unknown in India.

There are occasional surprises. Passing under a bridge one afternoon we came on a factory with a Rolls Royce sign on its wall.  The Barnoldswick factory is known for its production of the Merlin engine used in Spitfire and Hurricane fighters during the Battle of Britain. Today it makes turbines for jet engines.

At just under a mile long, the tunnel is less eerie or smelly than it sounds and we were through in fifteen minutes. Entry to the tunnel is controlled by light signals, although we were bemused to see a sign reading “If there is a fault with the signal, please let our Customer Support Team know”.

There are lights in the tunnel and you can see all the way to the exit from the time you enter. The sides of the tunnel are damp but not wet. My wife enjoyed switching on our boat’s headlamp and tooting our hooter to hear the echo. We didn’t feel uncomfortable at any stage.

It is the longest tunnel on the Leeds & Liverpool canal but that’s not its claim to fame. In 1912 a cow called Buttercup fell into the canal at one end and swam through to the other end before being rescued. Buttercup was revived at the Hole in the Wall pub in Foulridge with a whole bottle of brandy.

Canal boating isn’t everybody’s cup of tea. It’s very, very slow. But for many people the waterways have their own magic. There are 38,000 narrowboats on the 3,000 miles of navigable waterways, and the number of people enjoying barging holidays has doubled in ten years.

About 6000 narrowboats are registered as permanent homes on Britain's waterway system and are a growing community either living in moorings or continuously cruising. We did well to choose the Leeds & Liverpool canal and a boat company in the Yorkshire town of Skipton for our canal experience.

The canals in England and Wales are managed by the Canal & River Trust and are a major leisure and tourism attraction and natural resource. I recommend you try narrow boating for a different holiday.