Maropeng - returning to your roots 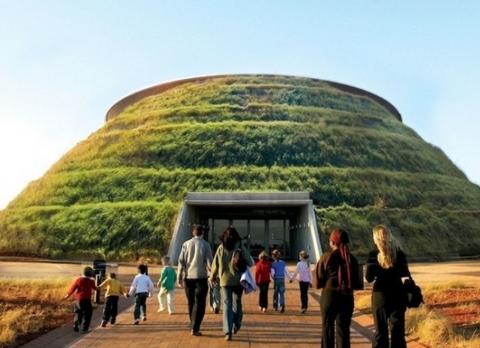 A few weeks back we took the grandchildren to Maropeng for a Saturday outing. It was a good experience.  Maropeng – in the Setswana language Returning to your roots - is an hour and a half’s drive from Midstream past Krugersdorp and the roads are well signposted. Where else can you see real fossils, learn how humankind was born, view stone tools a million years old, and play interactive games, all in one morning?

You need to book your tickets and tour time in advance on the internet. Guided tour groups depart every hour. The path from the car park is laid out in cement and stone, and the area is planted with indigenous trees and shrubs. The entire complex is very clean and wheelchair friendly. COVID protocol is strictly observed.

The outdoor reception area provides benches while you wait for the tour to start. There are gift shops, a photo shop, restrooms and a cafe serving snack foods.  We battled to print out our pre-booked tickets from the internet, but the ticket office around the corner sorted our problem out quickly and efficiently, with smiles all round.

The Maropeng Visitor Centre exhibition, which opened in 2005, takes you on a journey through time. It’s a self-guided interactive tour, which includes a memorable underground boat ride. The tour is divided into three parts: an orientation talk, the boat ride, and the exhibition itself.

At 1130 on the dot the guide led us to a point near the main building, along a pathway framed by rocks and indigenous shrubs. He explained that Maropeng lies in the middle of a vast world heritage site called The Cradle of Mankind, which is where the human race began. There are many cave sites containing fossils of our ancestors, including two famous fossils called “Mrs Ples” and “Little Foot”. These fossils were unearthed over many years by Dr Robert Broom and his colleagues from Wits University.

The Cradle of Humankind was declared a World Heritage Site in 1999 because of its contribution to our knowledge about the birth of humanity. Parts of the Cradle are still unexplored and no one knows what still lies hidden in the Sterkfontein Caves and other sites.

After the orientation the guide leads you to the dome that houses the exhibition itself. The rest of the tour allows you to take all the time you need to explore. The exhibit area covers an impressive 2 500 square metres and 3.5 million years.

The boat ride takes you through a series of caves showing the stages of evolution of the planet. It begins with the origin of the universe and the role of the four classical elements of water, air, fire and earth in creating the planet. My grandchildren loved the ride which takes you through a waterfall you feel sure will drench you at any moment, past icebergs and volcanoes, with thunder, lightning and roaring winds.

The exhibition is very child-friendly, and at the same time interesting to adults. As a teacher I found it fascinating to see the many clever and creative ways complex information is conveyed through the many exhibits. My grandchildren found buttons that buzz, caves that light up, robots that talk, and levers to pull. Adults can explore the same interactive creations to learn more about the scientific treasures discovered in the Cradle of Humankind World Heritage site.

Imagine the challenge posed to the museologists and museographers of Maropeng, to conceive and create an exhibition that explains the origins of our planet and the development of humans and our ancestors over the past few million years. They chose to start from the beginning of the world, to the formation of the Earth’s continents and the development of humans, plants and animals. To show how it works they provide an introduction to DNA and the concepts of evolution and extinction, and explain how fossils and limestone caves are formed. No small undertaking and they’ve done it brilliantly.

Maropeng tells us that Africa is the birthplace of humankind. The ancestors of modern humans emerged seven million years ago, right here in Africa. At some point, our DNA split to a different development path.  The first stone tools were used in Africa 2.6-million years ago and our ancestors were able to use and control fire at least one million years ago, which is probably why our species survived.

But the exhibition also sounds a warning. Life on earth has been rocked by five major extinctions. The last great extinction was 65-million years ago, when the dinosaurs were wiped out. Today, we may be in the midst of the sixth major extinction, with mankind as the driver.