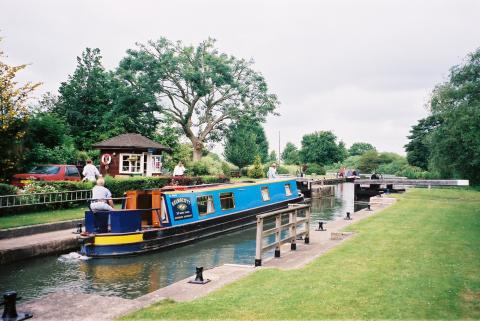 As you drive through the English countryside, you may glimpse a stretch of water with a few houseboats either moored or moving slowly down the canal. The first-time visitor might wonder why these waterways exist, how they originated, and what their purpose was. The canals enabled England to be the world's first industrialised country, and without canals and canalboats the British empire of the Victorian era would never have come about.

If you stop your car and wander down to the canal towpath, it will feel like going back a hundred years in time. You will notice the silence. After a while birds and insects start moving about. As you walk down the towpath you may come across a family of swans. Under a bridge you may find a plaque with the name of the builder and a date 200 years old. Passing boats will call out cheerful greetings. You will feel at peace. These are the English canals.

England was the first country to develop a nationwide canal network. During the Golden Age of British canals between 1770 and 1830 the canal system covered nearly 4,000 miles.  During the industrial revolution the cities of Leeds, Sheffield and Bradford needed an efficient transport system for their textile and coal mining production. The Leeds and Liverpool Canal was built to access the port at Liverpool for the export of finished goods.

The canals enabled the country to become the world's first industrial power and created the wealth that led to the British Empire in the Victorian Era. The bulk of the canal system was built in the industrial Midlands and the north of England, carrying  manufactured goods, raw materials and coal.

The canal network only lasted seventy years. After 1840 canals were replaced by railways. The 20th century brought more competition from road haulage, and by the 1920s and 1930s many canals had been abandoned.

Then in the 1940’s Britain re-discovered the recreational beauty of the inland waterways and began to restore the system and bring it under professional management. Today canals in England and Wales are managed by the Canal & River Trust and are a major leisure and tourism attraction. The towpaths teem with walkers, anglers and cyclists, and there are thousands of volunteers working on canal restoration projects from Devon to West Sussex to Cumbria.

There are 3000 miles of canals in the UK and many boat hire companies. To survive, these companies have to provide an excellent service on a well-equipped working canal.  A few hours on the internet with Trip Advisor will soon identify winning combinations.

There are many canals, urban and rural, crowded and solitary. And many types of narrowboats, from basic one-roomers to ultra-luxury fitted suites. With all this variety on offer, a few evenings’ research will enable you to find the kind of narrowboat experience that’s just right for you.

In the old days canalboats were pulled along the towpath by horses but today thankfully they are fitted with diesel engines. Entire families lived on the narrowboats, with even the children operating the locks and leading the horses. Many of the early boaters couldn't read or write. To speed up journey times bargees often fought each other over access to the locks.

The families’ place of work was also their home. Families endured overcrowding and hard conditions every day. Husband, wife and up to 6 children lived in a very limited space. The cabins were freezing cold in winter and boiling hot in the summer.

The bargees decorated the exteriors of their boats with rose and castle paintings, flowerpots and imaginative names in bright colours, practices copied by boat owners today.

In the 1940’s Britain re-discovered the recreational beauty of the inland waterways and began to restore the system and bring it under professional management. Today the towpaths fill with walkers, anglers and cyclists, and there are thousands of volunteers working on canal restoration projects from Devon to West Sussex to Cumbria.