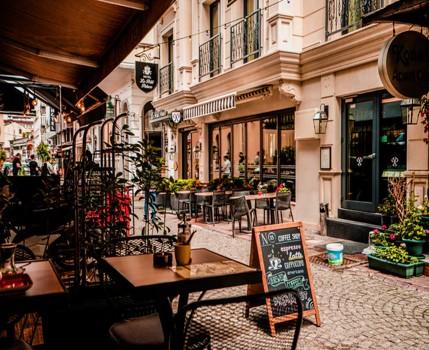 A Croque Monsieur is a toasted sandwich of ham, cheese, and béchamel sauce, dipped in beaten egg before grilling. A Croque Madame adds a sunny-side-up fried egg on top to resemble a lady's hat or beret, hence the name.

This staple of French cuisine is a popular lunchtime meal throughout France. But describing a Croque Monsieur as a French ham and cheese sandwich does not do it justice. With the right quality ingredients, and served in a boulevard café, it becomes a gastro experience that creates a unique memory for every visitor to France.

Many cafes, bistros and brasseries offer the standard croque monsieur and croque madame, and regional versions can be found across France. Variations include croque poulet that replaces the ham with grilled chicken, croque Auvergnat made with bleu d’Auvergne cheese and croque Bolognese (commonly called the croque boum-boum) made with Bolognese sauce.

Even McDonald's in France makes its own croque monsieur called Le Croque McDo. Their version consists of two slices of melted Emmental cheese and a slice of ham in a toasted sandwich.

To make your own croque monsieur add thinly sliced ham to buttered sandwich bread and top with Emmental or Gruyere cheese. Dip in beaten egg, add a dash of béchamel sauce and a sprinkling of grated cheese, and place under a hot grill for 45 seconds.

How did it become such a famous French dish on the menus of so many eateries? One version of the legend suggests the sandwich was created by accident when French workers left their lunch buckets too close to a hot radiator The heat toasted the bread and melted the cheese in their sandwiches.

Another story dates back to 1901 in a Paris brasserie on the Boulevard des Capucines. When he ran out of baguettes for the restaurant’s sandwich of the day, the chef took a loaf of pain de mie (sandwich bread), sliced it, added ham and cheese between the slices and baked it to crispiness. When a customer asked about the source of the ham in the sandwich, the chef pointed to the butchery over the street and replied “C’est la viande de monsieur (It’s that fellow’s meat).” The word “croque” literally means “bite” in French, and voila–le croque monsieur – a taste of his meat.

The famous sandwich was referred to by name for the first time on a Parisian Cafe menu in 1910 and its first mention in print appears in Proust’s 1918 work In Search of Lost Time. (Source: Wikipedia)

I enjoyed my first croque monsieur in Beziers, capital of the Languedoc wine country and birthplace of Resistance hero Jean Moulin. The Canal du midi passes through Beziers and you can moor your hire boat in the basin below the town and walk up a flight of stairs to the town.

The town centre is the Avenue Paul-Riquet, a leafy esplanade lined with cafes, crepes stalls, restaurants, and shops. It is named after the 17th century tax collector who lost his health and his fortune in his obsession to build the Canal du Midi, hoping to join the Atlantic with the Mediterranean. Beziers boasts one of the star rugby teams in France which is a great conversation opener with the locals.

The Béziers Feria (festival) is the biggest event of the year in the Languedoc-Roussillon region and takes place in the month of August (as it will in 2021). A million people visit this festival of bullfighting, eating, wine tasting and music each year. There are bullfights in the arena every day and when the corrida is over the visitors take over the whole town. The party continues until dawn with bodegas, flamenco and casitas everywhere.

Sunday brunch is an institution in my household and depending how we feel we may enjoy it at home or at one of the many restaurants around us. A few weeks back we brunched at a restaurant in the theatre district and to my delight, I found Croque Monsieur among the light dishes on the menu. My dear wife was curious and I shared my limited knowledge of the dish, and the related memories, with her.

The next Sunday we decided to enjoy our brunch at home. She prepared us delicious grilled ham and cheese sandwiches garnished with fresh lettuce and tomato, topped with a fried egg. These are “Croque Marthinette” announced.