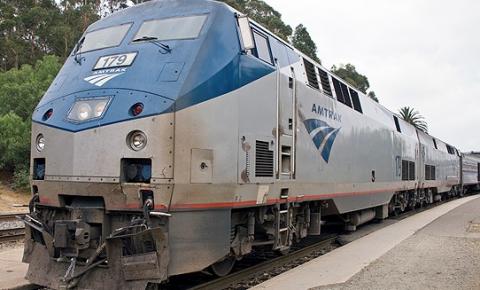 They say that Steve Goodman (1948 – 1984) wrote only one good song, but that’s not true. He wrote a few really good songs and many average songs, but "City of New Orleans" was the song that made him famous.

Riding on the city of New Orleans

There are fifteen cars and fifteen restless riders

Born on Chicago's North Side to a middle-class family, Goodman began writing songs as a teenager. In 1967 he spent a month performing in Greenwich Village in New York. Back in Chicago he chose to pursue his music fulltime after discovering the cause of his continuous fatigue was leukaemia. In 1971, Goodman played at a Chicago bar called the Quiet Knight as the opening act for Kris Kristofferson, who once said "City of New Orleans", was "the best damn' train song I ever heard".

On September 20, 1984, Goodman died at the University of Washington Medical Centre in Seattle, Washington. He was survived by his wife and three daughters. He lived for only thirty-five years but during that time, he made an indelible mark on the music industry.

Out on this southbound odyssey

The train pulls out of Kankakee

Rolling past the houses, farms and fields

Passing towns that have no names

And the graveyards of rusted automobiles

The City of New Orleans is an Amtrak passenger train which runs overnight between Chicago and New Orleans with a stop in Memphis, linking three of America's great music cities. Goodman’s song was inspired by a train trip he and his wife took from Chicago to New Orleans to visit her elderly grandmother. Today, you can ride the City of New Orleans from end to end in 19 hours, any day of the week.

One day in a Chicago bar, Goodman met the folk singer Arlo Guthrie, and asked if he could play him a song. Guthrie agreed on condition that Goodman buy him a beer first, saying he would listen to the song for as long as it took him to drink the beer. Goodman played him "City of New Orleans", which Guthrie liked so much he asked to record it.

Ride their father's magic carpet made of steel

And mothers with their babes asleep

Go rocking to the gentle beat

And the rhythm of the rails is all they feel

Guthrie's version was a Top-20 hit, giving Goodman the financial and artistic success he deserved. The song became an American icon, recorded by Arlo Guthrie, Johnny Cash, Judy Collins, Chet Atkins, Lynn Anderson, and most of all Willie Nelson, whose version earned Goodman a posthumous Grammy Award for Best Country Song in 1985.

Although Goodman recorded several albums, none were commercial successes. His song writing output was vast, and his live performances sold out. Bob Dylan sang backing vocals on the title track from Steve’s second album under the alias Robert Milkwood Thomas.

Night time on the City of New Orleans

It's halfway home and we'll be there by morning

Through the Mississippi darkness rolling to the sea

Though he had periods of remission, Goodman knew he was living on borrowed time, and friends have said that his music reflects this. His wife Nancy, writing his obituary, said of him:

“Basically, Steve was exactly who he appeared to be: an ambitious, well-adjusted man from a loving, middle-class Jewish home in the Chicago suburbs, whose life and talent were directed by the physical pain and time constraints of a fatal disease which he kept at bay, at times, seemingly by willpower alone . . . Steve wanted to live as normal a life as possible, only he had to live it as fast as he could . . . He extracted meaning from the mundane.”

Singing good morning America, how are you

Saying don't you know me I'm your native son

Yes I'm the train they call the City of New Orleans

"Steve Goodman: Facing the Music", by Clay Eels, published by ECW Press May, 2007.