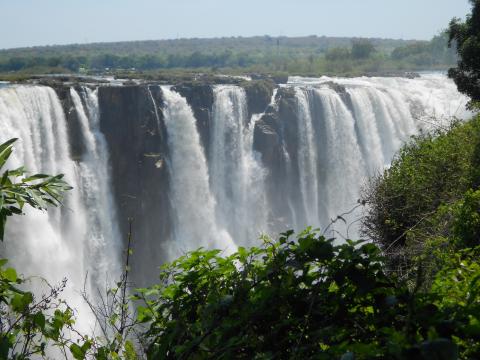 The Victoria Falls is a spectacular place. At the height of the rainy season, five hundred million cubic meters of water plummet over the edge every minute, over a width of nearly two kilometres, into the gorge a hundred meters below. You can hear the roar of the falling water from the airport 40 kilometres away. On a wind-free day during high-water season, a cloud of mist floats high above the falls and the column of spray can be seen from the air as you come in to land.

At a width of 1708m and height of 108m, it is the largest waterfall on Earth. The Angel Falls in Venezuela are higher but not wider. It’s 1.5 times wider than, and double the height of, Niagara Falls with (unlike Niagara’s urban sprawl), scenic national parks on either side.

When David Livingstone first laid eyes on the Falls in 1855, little did he know that it would be confirmed as the world’s largest waterfall, one of the Seven Natural Wonders of the world, and a World Heritage Site.

Victoria Falls is unashamedly a tourist town. There are many hotels and lodges, and lots to do. Visitors can enjoy game viewing, white water rafting, bungy jumping and helicopter rides. Evening cruises on the river above the falls are also popular. I’ve visited Victoria Falls five times in my life, and I hope to go again.

And there is one amazing event that most visitors never experience. In certain months a little-known unique event occurs at the Victoria Falls that most visitors never hear about. The National Parks around the Falls remain open at full moon, to showcase one of nature’s most mystical, breath-taking phenomena – the magic of a lunar rainbow, or moonbow.

Moonbows are best viewed in the early hours of the moonrise, before the moon climbs too high in the sky. The Victoria Falls rainforest reserve provides guided night tours the night before, during and one night after the full moon, to maximise the chances of seeing a fully-fledged lunar rainbow. On cloudy evenings, these tours are cancelled.

Moonbows are best viewed in the early hours of the moonrise, before the moon climbs too high in the sky. The Victoria Falls rainforest reserve provides night tours the night before, during and one night after the full moon, to maximise the chances of seeing a fully-fledged lunar rainbow. On cloudy evenings, these tours don’t take place.

The path along the edge of the mist-soaked rain forest provides the visitor prepared to brave the tremendous spray, with an unparalleled series of views of the Falls. At midnight inside the National Park, in the pitch darkness, the moonbow shining above you is almost supernatural.

A Lunar rainbow or moonbow is produced by light reflected off the surface of the moon, refracting in turn through moisture in the air. At Victoria Falls, refracted water particles are always present in the spray which reaches up 1000 metres above.

When the full moon is bright enough to have its light reflected through this spray, a beautiful dancing rainbow glistens in the night sky. It is a magical event. Faint, delicate, and absolutely breath-taking, lunar rainbows are one of nature’s greatest creative acts.

The best moonbow viewing occurs when the moon is full and at its brightest, the skies are clear of cloud, the moon is low in the sky and the sky is very dark. The Victoria Falls is one of the few places on earth where these moonbow conditions occur regularly and can be easily accessed. The most spectacular lunar rainbows are seen in Victoria Fall’s flooding months, between April and August, when the falls are full and the sky is normally clear.

Lunar Rainbows are far more rare and subtle than their day-time equivalent.  The light from even the brightest full moon, is far less than that produced by the sun, so moonbows are often faint and rarely seen.  It is difficult for the human eye to discern the colours in a moonbow. As a result, they often appear to be white.

In certain rare months the moon is positioned so that the moonlight shines directly down the gorge. You are then able to witness a totally unique phenomenon, a huge lunar rainbow not seen anywhere else in the world. As the night moves on, the moonbows lower deeper into the gorge, casting their greatest glimpse of colour. On the Zambian side, the moon rises behind the viewer, creating a view of the lunar rainbow over the aptly named Rainbow Falls. It’s one of life’s great honours to experience this unique African phenomenon.