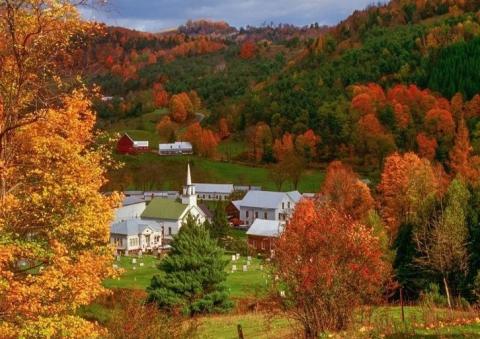 Successful people stress the virtues of hard work as the key ingredient in their success. But sometimes people are in the right place at the right time, and just get lucky.

Ben Cohen and Jerry Greenfield were two hippies living in the New England state of Vermont. But Cohen couldn’t sell his pottery and Greenfield was rejected by three medical schools, so they decided to go into the ice cream business together.

They bought a $5 correspondence course on ice-cream making and in 1978 opened the first Ben & Jerry’s in a converted filling station in Burlington, a student town without an ice cream parlour. They incorporated their business with $4,000 each and borrowed $4,000 from a bank.

The shop quickly became a student favourite thanks to its rich ice cream and creative flavours. Ben and Jerry made it a point to connect with the community, hosting a free film festival and giving away free ice cream on the store’s first anniversary.

Their ice cream was made with natural ingredients and plenty of butterfat. They chose imaginative names for their products, like Chunky Monkey, Rainforest Crunch, Whirled Peace, and Wavy Gravy. Jerry created unique flavour combinations and launched them without test marketing.

The business expanded like wildfire across the U.S. In 1980, they began supplying local grocers, and in 1981 opened their first franchise store. In 1984 the company went public, and Ben and Jerry were each worth 25 million dollars. By 1987 there were over a hundred Ben and Jerry’s ice cream franchises in 35 states. In 1988 Ben and Jerry were named U.S. Small Business Persons of the Year by President Ronald Reagan.

Because of its unconventional nature, the company had to do very little marketing. Media coverage of its various antics was guaranteed, providing free publicity for the company, its products, and its values.

From the outset, Cohen and Greenfield were deeply committed to Vermont’s economy and environment. They used local milk suppliers and hired local artists to design their cartons and graphics. When they needed capital, they sold shares to Vermont residents.

B & J's founders believed that companies have a responsibility to society. They set up the Ben & Jerry Foundation, which donated 7.5% of the company’s profits to worthy nonprofit organizations. These causes included safe houses for children, drug-addicted pregnant women, environmental groups, HIV-positive individuals, and the homeless.

Product Mission: To make, distribute, and sell the finest quality, all-natural ice cream in a variety of flavors made from Vermont products.

Social Mission: To operate the company in a way that recognizes the role that business plays in society, by initiating ways to improve the quality of life of the community.

Economic Mission: To operate the company on a sound financial basis of profitable growth, increasing value for our shareholders, and creating career opportunities and financial rewards for our employees.

Over time, Cohen and Greenfield came to view their business as, in Cohen’s words, “an experiment to see if it was possible to use the tools of business to repair society.”

They had a salary policy that no manager would be paid more than seven times the salary of the lowest-paid employee.

Ben and Jerry were admired inside and outside the company for their policies and were viewed by many as the company’s two biggest assets. But there were also those who criticized the company for “not walking its talk” in terms of treatment of its employees.

Despite the firm’s politically correct culture, employees held less than 1% of the company’s shares. And while Ben and Jerry frequently drew attention to the fact that their own salaries were only $130,000 per year, they didn’t say that their combined shareholdings were worth $50 million.

Ben & Jerry tried to be equally responsible when choosing suppliers. The brownies used in the Chocolate Fudge Brownie ice cream were bought from a bakery that used its profits to house the homeless. Rainforest Crunch ice cream featured nuts grown in South American rain forests. Wild Maine Blueberry ice cream was made with blueberries grown and harvested by the Passamaquoddy Indians of Maine.

Similarly, for the milk and cream that form the bulk of its products, Ben & Jerry’s was committed to buying from Vermont dairy farms, to whom it paid above-market prices.

The 1980s consumers who loved Ben & Jerry’s super premium ice cream were entering middle age and growing more health conscious. At the same time, new FDA labeling rules meant that customers could see the amount of fat each scoop contained. Ben & Jerry’s sales, which had been steadily increasing between 1988 and 1992, slowed dramatically in 1993. The only sales growth came from its frozen-yogurt line.

Ben and Jerry were getting bored with work and going off on unplanned holidays, which did not go down well on Wall Street. Investors believed the business put its principles way ahead of its shareholders. Sales were falling while social responsibility costs increased.

The company suffered its first financial loss in 1994. By 1999 the share price had fallen nearly 50 percent from its peak. Investors felt the company’s social mission was a luxury it could no longer afford. The shares consistently under-performed the market.

The business is sold.

Ben and Jerry said they were hoping their company would stay in Burlington and operate independently of Unilever's U.S. ice cream business, still focused on its social mission. They were wrong.

Where are they now?

Ben Cohen and Jerry Greenfield still live near each other in Vermont. According to Wikipedia both men have an estimated net worth of $150 million.

Today, thanks to Unilever, Ben & Jerry's ice creams are available in all the major cities in South Africa. You can even buy them at Woolies.