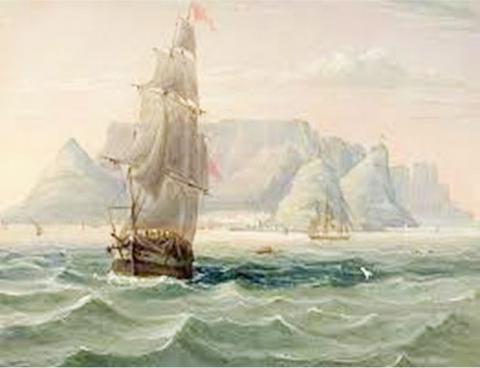 South Africans remember the Alabama from an Afrikaans folk song “Daar kom die Alabama”, traditionally sung in the Cape on Tweedenuwejaar. But the true story, involving secret agents, spies, deception, a naval battle, and an unsolved mystery, is better than any legend.

The American Civil War (1861 – 1865) was fought between the Northern Union states and the Southern Confederate states. The central issue in the war was the practice of slavery which the North wanted to abolish and the South, with its vast fields of cotton, fought to retain.  In 1860, four million of the 32 million Americans were black slaves, almost all living in the South. Both sides raised volunteer and conscription armies. Four years of intense and bloody combat followed, mostly in the South.

The North had a much stronger navy and were able to blockade the Southern ports. The blockade ruined the Southern economy, because the cotton crop could not be exported, thus removing the Southern states’ main source of income. After four years the North, with its superior economic resources, won the war.

By the end of the war, much of the South's infrastructure had been destroyed, especially its railroads. The Confederacy collapsed, slavery was abolished, and four million enslaved black people were freed. Between 620,000 and 750,000 soldiers died.

The South fought back. They bought ships in Britain, converted them to warships, and attacked the North’s merchant supply ships in the Atlantic and Pacific oceans, to cut off supplies to the Northern army. Captured enemy ships were either burnt, sunk or sold.

The practice of attacking unarmed trading ships was known as “commerce raiding”. This form of legalised piracy began in the 16th century, when the English Queen Elizabeth licenced privateer Sir Francis Drake to seize Spanish treasure ships.  The practice continued through to the Nazi U-boat attacks on merchant shipping in World War 1 and 2.

The Southern warship Alabama was the most successful commerce raider in maritime history, attacking the merchant ships of the North. The Alabama roamed the high seas, creating havoc wherever she went, fighting for the cause of the South during the American Civil War. Over the course of her short two-year life, the Alabama sank, burnt or captured 67 Northern merchant sailing ships, an astonishing achievement. Enemy ships' crews and passengers were not harmed, but detained until they could be placed aboard a neutral ship or ashore in a friendly or neutral port.

Southern spy Commander James Bulloch was given the difficult task of finding badly needed ships for the Confederate States Navy. He moved to Britain, where he persuaded the Liverpool shipbuilders Laird Brothers to build the Alabama in 1862. Bulloch financed the transaction by selling black-market Southern cotton illegally to British textile mills.

The British government adopted a neutral stance in the Civil War. But there was a loophole. Under British neutrality law, it was possible to build a ship designed as an armed vessel, provided it was not actually armed until it was in international waters. Alabama was built with reinforced decks for cannon and ammunition hidden below the water-level. When word leaked out, the British government ordered the ship to be impounded, but the Alabama managed to slip away to the Azores, steaming down the Mersey supposedly to carry out engine trials.

A Southern naval officer, Rafael Semmes, was appointed captain of the Alabama. Semmes was an experienced sea-captain, navigator and gunner. With Bulloch at his side, he sailed from Liverpool to the Azores in August 1862 to take on his new command. On arrival, he began fitting the new vessel with provisions, armaments, and 350 tons of coal, from a supply ship previously arranged by Bulloch. Bulloch then returned to Liverpool to continue his secret work for the Confederate Navy.

Semmes offered signing money and double wages, paid in gold, to any seaman who signed on for the voyage. He promised additional prize money for all destroyed Union ships.  Of the original 83 crewmen that signed on that day, many completed the full voyage.

The Alabama covered an astonishing area of ocean in her short life.  She carried out seven expeditionary raids, spanning much of the globe, with enough adventures to fill many books. She spent two months in the Eastern Atlantic, where she captured and burned ten enemy ships before continuing to New England. Sailing south, she raised havoc in the West Indies, then cruised west into the    Gulf of Mexico where she sunk the Union (Northern) side-wheeler USS Hatteras off the Texas coast near Galveston. After crossing the Equator, she rampaged down the coast of Brazil, taking 29 prizes, at the peak of her raiding career, before sailing on to Africa and Cape Town.

Alabama moored in Saldanha Bay on 29 July 1863.  After checking that there were no enemy ships in Table Bay, she made a much-needed visit to Cape Town for provisions and ammunition. Although officially neutral as a British colony, many Capetonians supported the Confederate South, and people lined the slopes of Signal Hill and Lion’s Head to cheer the Alabama’s arrival. The Alabama remained a topic of conversation for many months after she left Cape Town, heading for the French port of Cherbourg for a complete overhaul and refit. Thomas Bowler painted a watercolour of the ship leaving Table Bay.

“Cape Town was agog – the heights overlooking Table Bay crowded with people; the road to Green Point lined with cabs; the windows of the villas at the bottom of the hill all thrown up, the ladies waving their handkerchiefs, and one and all joined in the general enthusiasm. And the great excitement of this August day in 1863, was that, in full view of Cape Town’s residents, the Alabama made short work of capturing a Federal barque, the Sea Bride, just off the Camps Bay beachfront”. Weekend Argus, August 2017.

From Cape Town the Alabama sailed to the East Indies, where she spent six months before once again calling at the Cape en route to France. A horde of sightseers and sympathisers crowded the ship, but the captain was in a hurry and within three days the Alabama left. After seven expeditionary raids, Alabama had been at sea for 534 days out of 657, never visiting a single Confederate port. She boarded nearly 450 vessels, captured or burned 65 merchant ships, and took more than 2,000 prisoners without a single loss of life from either prisoners or her own crew.

The Alabama met her end after docking at the French port of Cherbourg for an extensive refit. The North’s ironclad battleship Kearsage under Captain John Winslow, raced to Cherbourg and blockaded the port. Captain Semmes was hoping to stay in port for several months but the French ordered him to leave. The Alabama bravely sailed out to take on the Kearsage. The two ships fought a sea battle while spectators watched from the shore, including the impressionist artist Manet, who created a painting of the scene.

After being at sea so long, Alabama was no match for the Kearsage and was reduced to a battered hulk in an hour. One of Kearsarge’s shells tore open a midsection of Alabama's starboard waterline. Water rushed through the defeated cruiser, drowning her boilers and forcing her down by the stern to the bottom. Of her 170 crew, the Alabama suffered 19 fatalities and 21 wounded.

As the Alabama sank, Semmes threw his sword into the sea, depriving Kearsarge's commander Captain John Winslow of the traditional surrender ceremony of handing the loser’s sword to the victor. Semmes’ act was seen as dishonourable by many.

Then, in an apparently strange twist of fate, 41 of Alabama's officers and crew, including Semmes, were rescued from the sea by the British steam yacht Deerhound, owned by John Lancaster, a wealthy British businessman.  Captain Winslow was forced to stand by and watch Deerhound spirit away to England with his much sought-after adversary, Captain Semmes, and his surviving shipmates. The North would have loved to capture Semmes and put him on trial but they were thwarted.

Lancaster was taking a holiday cruise aboard the Deerhound, his steel hulled steam yacht of some 190 tons. (Coincidentally, the Alabama had been built in the same shipyard under great secrecy for the Confederate Navy 18 months earlier.) When he learned of the impending battle, he ordered the Captain of the Deerhound to sail offshore so that he, his wife and his family could watch the action. The log of the Deerhound recorded the battle in full detail. When questioned after the incident, Lancaster said he had only arrived in Cherbourg the previous day, having travelled north by rail from Caen.

The log of the Deerhound records the battle that followed in full detail. Finding themselves to be within two hundred yards of the sinking Alabama, Lancaster ordered two boats to be lowered and saved forty-one of the cruiser’s complement including the ship’s Captain, Raphael Semmes, from drowning. At this point, and to avoid any threat of capture by the Union vessel, Deerhound steamed at full speed from the scene heading for Cowes and hence to Southampton. During this short trip, Lancaster and crew of the Deerhound tended the wounded sailors from the Alabama until they could be delivered ashore in England. By this brave action, Lancaster and the crew of the Deerhound, ‘by their providential presence’ saved many lives that would have been otherwise lost.

The rescue created great controversy in Britain and in America, where letters and opinions appeared in many papers. Lancaster was condemned by friends of the Northern Government for his actions but public opinion in England swung behind him, endorsing his action and applauding him for his courage. Lancaster received many letters of thanks, including one from James Bulloch and another from President Jefferson Davis.

Speculation continues to this day on Lancaster’s role and the true story of the Alabama-Deerhound encounter. Evidence later emerged confirming that the Deerhound was berthed in Cherbourg during the Alabama's visit, and that Lancaster went aboard and held a meeting for some hours with her captain.

Was Lancaster paid to “rescue” Semmes? One suspects the hand of secret agent James Bulloch behind these events, perhaps?

From England, Semmes made his way back to America via Cuba and from there to the Texas gulf coast. The U.S. briefly held Semmes as a prisoner after the war, but released him on parole. After his release, he worked as a professor of philosophy and literature at Louisiana State Seminary, as a county judge, and then as a newspaper editor.

He defended his actions at sea and the political actions of the southern states in his 1869 Memoirs of Service Afloat During the War Between the States, a defence of the South.  In 1871 the citizens of Mobile presented Semmes with a home which remained his residence until his death in 1877.

As a Confederate spy, James Bulloch was not included in the general amnesty that the new US government approved after the Civil War. He remained in Liverpool, where he became quite successful as a cotton importer and broker. Bulloch died in 1901, at the age of 77. His headstone bears the inscription: "An American by birth, an Englishman by choice".

One hundred and twenty years after Alabama’s loss, the French Navy mine hunter Circe discovered a wreck in 200 feet of water off Cherbourg. French Navy Commander Max Guerout later confirmed that the wreck was Alabama’s remains. A non-profit organization “Association CSS Alabama” was founded to explore the shipwreck. Although Alabama lies within French territorial waters, the United States government claims ownership of the wreck as a spoil of war

In July 2002, the Naval Historical Centre conducted an archaeological investigation of Alabama. In spite of poor weather conditions, French and American archaeologists, French volunteer divers, and French Navy personnel continued excavation of the site and recovered a number of artifacts, including the ship’s bell and its mounting bracket. The artifacts have been conserved and are on display at La Cité de la Mer in France, the Museum of Mobile in Alabama, and the National Museum of the U.S. Navy in Washington DC.