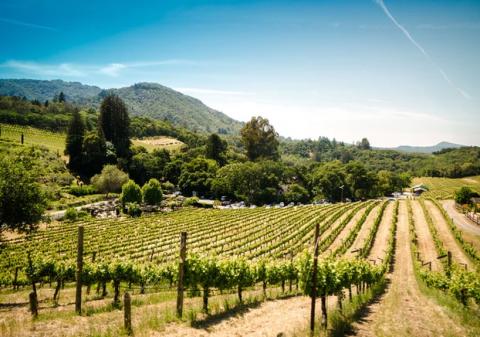 Somewhere in the Western World, two wine estates are located side by side in a lovely valley. Both are known for their riesling, sauvignon and chenin varietals. On weekends wine lovers visit these estates to swirl, sip, and taste.

From the main road, visitors enter the first farm through imposing newly painted gateposts. As they drive up between the vineyards to the tasting room, many people admire the pink rose bushes at the end of each row of vines. Roses in vineyards earn their living by acting as an early warning system. They attract insects like aphids, and fungal disease like black rot and mildew, before the vines.

When you pull up at the farm buildings, you may notice the winemaker standing outside the winery in his white coat. If you wave to him, he’ll wave back and most likely invite you to tour the winery after your tasting session.

The winemaker is always keen to show off his spotless winery, so clean you can eat off the floor. He’ll proudly point out the stainless-steel vats and crushers, the state-of-the-art laboratory that tests the wine’s chemical and biological profile, the transparent piping where you can see the raw wine being pumped from one place to another. He will explain the technique of laying electric cables below the vines which turn on automatically in winter, when the temperature drops below a certain level. The winemaker’s enthusiasm for his job is catching. He says the science of wine making takes many years to master.

After tasting, many visitors choose to visit the adjacent wine estate as well. The entry gateposts here are not quite as imposing, they need painting. Multicoloured rose bushes in pink, yellow, orange and red sit at the end of every third or fourth row.  They’ll note the rickety old farmhouse with its tin roof, the winemaking equipment in the old barn, the rusting piping made of galvanised iron. During the season, they might see the old winemaker, the farmer himself, with his beard, his khaki shorts and his pipe, supervising the picking and crushing, tasting the wine hour by hour during fermentation, testing the temperature with a basic thermometer.

Now the truth of the matter is that this old farmer wins a gold medal every year at the wine shows, and his riesling has a 5-star Platter rating. The first farm, with the enthusiastic young winemaker, may in good years win a bronze. You may wonder, as I often do, what makes the difference, since these farms share the same soil and climate.

There are those who say winemaking isn't art, it’s a scientific process. But most winemakers insist wine is an art form, since it involves creativity using a raw material in much the same way that chefs use ingredients. And the winemaker has only the grapes, whereas a chef has a far wider selection at his disposal for each dish.

Terroir is a French term used to describe the factors that affect a crop's genetic makeup, including climate, farming practices and the specific growth habitat. Collectively, these form the crop’s character or personality. Romance poets and writers have described wine as the expression or manifestation of its terroir, and its makers as conduits for mother nature, letting the grapes tell their own story.

But that isn’t correct. Today microbiology and chemistry are part of the winemaking process at every stage, and directly impact the creative process. The level of nitrogen in the soil is tested during the growing season to balance the vine’s canopy with the amount of grapes it is carrying.  As the grapes ripen, the winemaker decides the right time to harvest, using laboratory tests to support his subjective view of the sugar, acid, and tannin balance, from tasting the fruit in the vineyard.

Laboratory analysis also plays an important role during fermentation, the crucial seven to fourteen days during which grapes become wine. During this time, the winemaker adds yeast, macerates the skin of the grapes, and manipulates the temperature to achieve the correct fermentation speed, flavour and colour. But while researchers have a good understanding of which chemicals create bouquet and palate, just how those unique qualities are imparted into the wine is still more art than science. Great wine requires judgement and choices that depend on the winemaker’s taste, personality and aesthetic preferences. These choices determine what ends up in the glass.

Great wine has the capacity to touch the drinker in a way that science cannot. There may be beauty in science, but it doesn’t evoke that gut reaction, that instinctive emotional response when we experience great art or great wine.

Professor Orly Ashenfelder was a professor of economics at Princeton, a statistician and lover of French wine. In the 1990’s he used statistics to correlate wine vintages with their subsequent auction prices. Using decades of weather data from the Bordeaux region, he proved that low levels of harvest rain and high levels of summer temperatures produce the greatest wines in terms of both taste and capital appreciation. In hot summers grapes ripen early, lowering acidity. In years of low rainfall, the fruit becomes concentrated. Ripe grapes make low-acid wines and concentrated grapes make full-bodied wines.

Bordeaux wines are aged in oak for 18 to 24 months before bottling. Only then can the wine be tasted and evaluated by experts. Orly’s formula gave investors a guide to a vintage’s future price, two years before industry experts could taste and grade.

In 1989, when the Bordeaux wines were only 3 months in the cask and yet to be tasted by critics, he predicted that they would become “the vintage of the century”.  A year later he said the 1990 vintage would be even better. Both predictions were correct. The 89’s turned out to be a truly excellent vintage and the 90’s were even better.

Needless to say, the wine critics were incensed and the French wine industry has dismissed Orly as a “crank”. Yet his ideas and his statistical work were remarkably on the mark, and useful to potential investors in Bordeaux and Burgundy wines.